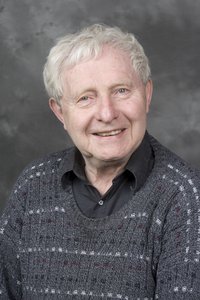 At yesterday's faculty meeting, Professor Emeritus Peter Wegner of Brown University's Department of Computer Science (Brown CS) received a recognition award that celebrates his sustained and dedicated work as editor of the Brown University Faculty Bulletin, which began in 1988. The honor follows closely after recent praise from Paris C. Kanellakis Memorial Lecturer Donald Knuth, who credited Peter with a suggestion that eventually led to the invention of attributed grammars.

"I'm delighted to see this," says Department Chair Ugur Cetintemel. "Not all computer scientists pay as much attention to their prose as their algorithms, but Peter always has. This award honors not just his ability as a writer and editor but how he used those skills in service to benefit Brown."