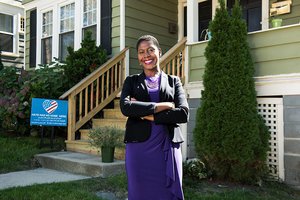 More than two decades ago, two undergraduate women at Brown CS, Laurie Kardos and Jesse Marmon, founded The Artemis Project, a free, five-week summer program for rising ninth-grade girls. Their goal was to enhance the self-confidence and visibility of women in the CS community by providing hands-on experience with programming. Twenty-one years later, the program has only become more inclusive, with STEM students of all underrepresented genders (female, trans, and non-binary) invited to apply.

Over the years, the achievements of Artemis Project graduates have continued to amaze us. Just last summer, Nirva LaFortune stepped into the spotlight by decisively winning a special election in Providence City Council's Ward 3. Her story neither begins nor ends with her Artemis summer, but if we look outward from those five weeks just before high school, we can see strong evidence of the power of outreach and the contributions that so many Artemis alums are making in science, learning, culture, and their community.

"Back then," Nirva remembers, "for urban, high-risk girls, the Artemis community was extremely valuable. We had a diverse group, almost all girls of color, and it was so interesting to learn about each other's cultures, cook together and share food from Southeast Asia and Cape Verde, and engage on a very deep, personal level. For most of us, it was our first time on Brown's campus. We walked into empty classrooms and pretended we were students. 'This is what college feels like,' we said to each other, and we wanted to be part of it."

Jes Ellis (then Jes Howell) '98, co-director for the second year of Artemis and one of Nirva's counselors, offers a portrait of LaFortune that spans the decades between then and now: "She moved confidently across Brown's campus like she was junior faculty and never hesitated to engage students or professors when she had a question or comment....Over the years, Nirva never failed to impress me: when she earned a scholarship to attend college in Florida, when she had her first child at age 19, when she bought her first house at age 21, when she worked her way through her undergraduate degree while raising her son on her own, when she ran her first marathon, when she accepted a job at Brown University and started her Master's degree, when she decided to run for City Council....When Nirva says she's going to do something, she gets it done."

A desire to get things done was definitely one of the motivating factors that led LaFortune to seek office. "Issues like education, economic development, violence, and safety impact all of us," she says. "At a national level, we're seeing people coming together to address racism and discrimination and create inclusion, and I'm trying to bring my community together to do this at a local level. I think we have to ask ourselves: 'Am I a community partner? What can I do to create the kind of culture I want to live in? How do we come together to support each other?' If we're going to be a strong, safe community, we need to share ideas and create a culture of tolerance."

By this point, readers may be wondering how Jes was able to provide so many details about LaFortune's life post-Artemis. That's one of the more amazing parts of this story: she and Nirva, along with fellow Artemis co-director, Saori Fotenos (then Saori Taichi) '99, have maintained a friendship that began when they met in 1996. The three women have stayed in touch by sharing music and books, writing letters when separated across the globe, and sometimes calling each other as often as weekly. Jes tells us that Nirva's son, Messiah (a talented mathematician and scientist, she says, and part of a successful robotics team at the Mount Hope Learning Center a few years ago), has spent a week with her family each summer, and Nirva's daughter, Nyree, made the trip last year.

Saori finds an example of Nirva's "natural leadership and charisma" in one particular summertime moment. "Everywhere she goes," Saori says, "she's a source of inspiration. I can't think of a better way to show this than to mention my own daughter. Nirva and I had our first children days apart, and our families had a chance to spend a weekend at the beach together some years ago. My daughter still remembers how Nirva encouraged her to jump into the water when she was hesitant."

Does LaFortune see herself as an inspiration, as a mentor? Her answer is surprising: "Not necessarily. I created my own path, but Jes and Saori and other people laid down stones when I got lost. I see keeping doors open as one of my roles, and I think about Stokely Carmichael telling us not to forget about our community. I think the community should be a mentor, should encourage people to accomplish their full potential. But I do like to be a cheerleader, a motivator."

When Saori reflects on Nirva as a motivator, resilience and a joy in everything she does are two of the attributes that come to mind. "The mentoring and role-modeling that Jes and I hoped to provide to the Artemis girls back at Brown came full circle," she says, "in the form of Nirva inspiring my own daughter to be strong and courageous."

Over twenty years after Nirva's Artemis experience, all three women still see service and advocacy as a calling. Jes says, "I continue to aspire to inspire young women of color by teaching. I am a public elementary school teacher outside of Washington, DC. Today, all of my students have personal computers in their pockets, but the mission of The Artemis Project remains more relevant than ever. Nirva has shown that Artemis has had a lasting impact."

"We need more programs like Artemis," LaFortune says. "I was part of a very small cohort, but most of the girls in it had faced the same obstacles as me. So many people will remind you that you don't belong: as a kid, I was told to go back to Haiti, called the n-word, had rocks thrown at me, had my swimming pool set on fire. When I was nineteen and pregnant, people told me that I wouldn't accomplish anything, but Artemis had already helped me. Jes and Saori had helped me so much as individuals. I was empowered to make decisions for myself – I knew it'd be hard, but I could have my child, get a degree, and succeed. Programs like Artemis empower girls at a very important time in their lives. They show them the worth, the power they have."

The photo above is by Mike Braca and is © 2018 by East Side Monthly.