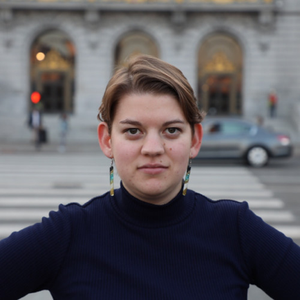 Click the link that follows for other stories in the Tech for Social Good Spotlight series, our Socially Responsible Computing program, and more news items about our innovative and pioneering alums.

Tech For Social Good Alum Spotlights is a series focused on recent Brown Computer Science graduates working at the intersection of computer science and social good. The goal of these interviews is to explore what it means to work in the technology for social good space, what technology for social good might even mean in the first place, and most importantly, share advice for Brown students considering this path. The spotlight is organized by Impact Labs, a student-run organization creating awareness and access to opportunities in the tech for social good space.

Ruby Goldberg graduated from Brown in 2017 with a degree in computer science and Latin American Studies. She is the Co-Founder and Executive Director of TechShift, an alliance of student groups at universities focused on using technology as a force for good and minimizing the negative impacts of technology.

The following conversation has been edited for length and clarity.

How did you become interested in using CS for social good?

It was not really intentional. I started college interested in engineering, but I took CS 15 my freshman fall and I really struggled. I didn't know what I was doing and it was all entirely new to me. But I ended up really liking CS for the same reasons I thought I would like engineering: the problem solving, the logic puzzles, and the satisfaction of working really hard to find an elegant solution. I kept taking CS courses, and at the same time, I was doing a lot of advocacy and activism work around climate justice. That was never really connected to me being a CS student, except that they both happened to be things I cared about. It wasn’t really up until my junior year that I really started to think a bit more consciously about what it meant to study CS and care about so many social issues, and what the intersection between these areas was.

My junior spring, I studied abroad and ended up doing an independent study looking at the impact of technology on indigenous communities in the Amazon. I stayed over the summer, so my junior summer, when most people were doing their internship before graduation to figure out where they were gonna work, I was in the Amazon without cell service and absolutely loving it. When I came home, I realized that I had to make a big decision about whether or not I was going to apply for software engineering jobs. If I wanted to apply to software engineering jobs, I was probably going to get an offer or not by December or January, and that was going to be well before anything else I was interested in would even open applications.

This prompted a personal decision about what I was going to do, but also ended up becoming a larger conversation about tech and social good, which ended up leading to me creating CS for Social Good at Brown (now called CS for Social Change) my senior Spring. That was really the first time that I’d had any significant conversations about what it meant as a technologist to think about social good questions, and not just do these two things separately. That’s how I started getting into the tech, impact, and ethics field.

What did you do after graduation to enter the CS for social good space?

I graduated pretty soon after I sort of unwittingly got into the tech, impact, and ethics field and helped create the CS for Social Good group at Brown. I had some long conversations with the CS for Social Good group at Stanford that helped us create the group at Brown and were looking to expand to other groups. I talked with them about how the groups have way more power working together at more campuses, but it is also really important to think about the connective tissues between these separate groups, given the complexity of the issues we’re tackling. That’s sort of how TechShift came about. When I started TechShift, I spent about 6 weeks reading articles, emailing people, having conversations, and bouncing around from one reference to the next trying to learn as much as I could about what people were already doing and how TechShift could be most helpful. From there, TechShift has grown kind of organically.

What do you think are some of the biggest challenges to students who want to work in the CS for social good space?

For a long time, the biggest challenge was lack of examples. When I was applying for jobs, I just didn’t see any examples of anyone doing this, and it was very unclear to me where I could go and where I should look. I didn’t know anyone who could even tell me where to look. I think communities are starting to be built for CS for social good so that's a step in the right direction. Right now, I think the biggest problem is that there's not a clear pipeline to connect students with opportunities to use their tech skills for social good, at least at an entry-level position. Part of that challenge is a mismatch of timing, part of that is just a disconnect with people not talking to the right circles, and part of that speaks to some of the challenges of actually using tech skills in ways that are impactful.

What is your advice for students who want to use their CS skills for social good about what they should do to pursue this path?

My first answer is for people who want to do software engineering or data science in their day-to-day job, but want to apply their skills to a good cause. There are a couple different ways to do that. There are several mission-driven tech companies, like Crisis Text Line, Khan Academy, or Duolingo. There are also listservs like Coding it Forward and Fast Forward that send out newsletters about job opportunities with tech-driven nonprofits. Some of the bigger nonprofits are also starting to have technical teams, although they often want people with more experience. Large nonprofits like Planned Parenthood, ACLU, Doctors Without Borders, and the Red Cross are starting to have technical teams that are not just IT. There are also some civic tech fellowships in the works to check out.

The other answer I would give is for people who are technologists that want to use their skills in a way that is impactful, but without going to work at a non-profit or an extremely mission-driven company. You can make sure that you're being a responsible and ethical employee when you go to wherever you are. You can also think about ways that you can use your leverage within an organization to push that organization to be better and ways that you can use your economic position to make an impact.

I would say there is also a role for people with technical backgrounds who go into other positions, whether that’s going into the non-profit or civic sector and being able to talk with technologists. It’s a little bit hard to go straight into tech policy, but there are some cool organizations and that’s another route for someone who gets a degree as a computer scientist but doesn’t want to be a software engineer and wants to go more into the policy and regulation side to use their skills and knowledge.

The views and opinions expressed above are those of an individual, and do not necessarily state or reflect those of Brown University or Brown University’s Department of Computer Science, nor does their publication here constitute an endorsement of them.