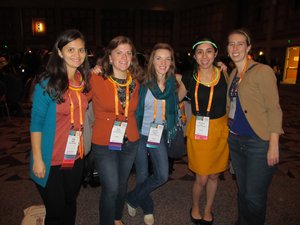 Carberry: Thanks so much for joining me for this interview. To start off, what is the Grace Hopper Celebration?

Hilliard: GHC or just Grace Hopper, was named after Rear Admiral Grace Hopper. A no-nonsense Navy officer who was a driving force behind many of the computing advances of the 40s, 50s and 60s.

Oesper: The conference was started in 1994 by Dr. Anita Borg and Dr. Telle Whitney as a forum to both highlight the contributions and visibility of women in computing, both in academia and industry, but it is main aim is helping young women find a place in the computing field. The conference has grown tremendously in recent years and on October 2-5, approximately 4800 people gathered at the Minneapolis convention center for the 2013 edition.  In fact, this year Brown had 13 undergraduate and graduate students in attendance.

Carberry: That is great that Brown had such good representation at GHC this year.  Why did you decide to go to the conference this year?

Oesper: I had never had the opportunity to attend Grace Hopper before and this year I just decided that I was going to make the time to go this year.

Hilliard:  I’d heard about GHC from friends and just decided to go. I’ve been interested in how to improve the gender gap in CS for awhile and thought that I might find resources and inspiration at the conference. When Layla and I discovered we were both going, we decided to see how many Brown CS students we could get to join us.

Carberry: How did you fund your travel and cost of attendance?

Hilliard: Layla is being modest. She and Irina Calciu both received industry sponsored (Xerox and Box respectively) scholarships through the Anita Borg Institute. Also, two undergraduates (Molly Long and Aisha Ferrazares) received Facebook Grace Hopper Scholarships. All of these are highly competitive awards!

Carberry: What was your most memorable moment or event from the conference? 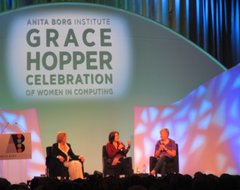 Discussion with Whitney, Sandberg and Klawe

Oesper: The opening plenary session of the conference was a conversation between Sheryl Sandberg (COO of Facebook), Maria Klawe (President of Harvey Mudd College) and Telle Whitney (President and CEO of the Anita Borg Institute).  It was amazing to get a chance to see these powerful and inspirational women interact and share insights about their own careers.  It really started the conference off on a great note.

Hilliard: Humm, my first thought was the plenary talk given by Megan Smith from Google [x] encouraging us to conduct “moonshot” science, but there is  another moment that keeps coming to mind. In one session Maria Klawe remarked that she had no idea how to change the negative stereotypes sometimes associated with computer scientists. This initially was pretty depressing because if someone as successful and influential as Dr. Klawe cannot find a solution, who can? Then I realized the important message: she hadn’t given up. She was at GHC, like she is every year. She was trying new ideas all the time. Her comment acknowledged that the problem is hard, but her actions encourage me to keep trying. There is hope if enough dedicated people take the problem seriously. That’s the moment that has really stuck with me.

Carberry: I hear you brought a furry friend to GHC. Can you tell me more about Brunetta and why she joined you?

Oesper: Ha!  [laughing] Now who told you that?  2013 is the first year that Brown University has sponsored a booth at the career fair at GHC.  The booth was staffed by a group of graduate and undergraduate students who handed out informational material about the department and collected resumes from potential applicants to the graduate program.  All students who submitted a resume were entered in a drawing to win Brunetta the Brown Bear (and her fashionable Computer Science Department t-shirt).  Brunetta (distant relation to Bruno) was easily the most popular bear at the conference. 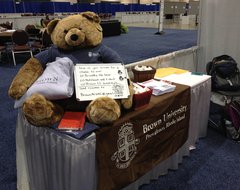 Hilliard:  We’d like to thank the Department of Institutional Diversity for sponsoring the booth.

Carberry: Can you expand a little on the benefits of going to GHC?

Hilliard:  One thing that makes Grace Hopper different is that participants come from all sorts of backgrounds and career paths. There are undergraduates taking their first CS class, famous tenured professors, industry software developers, industry executives and everyone inbetween. It’s a great opportunity to network, or just practice networking. Whether you are interested in academia or industry you can find talks and posters on recent research and industry developments as well as sessions about professional development, work life balance or dealing with being a minority in your workplace.

Companies are there to support women in computing, but also to recruit great talent. Yahoo! invited all of the Brown CS Women to an exclusive party Friday night. We got to learn more about what Yahoo!’s products. It was interesting to talk to people implementing and maintaining systems that I study in my research. I met one of their engineers and may be able to get access to some real-world data related to one of my projects! I also got some great leads on summer internships. Recruiters are out in force at the career fair, and I even somehow found myself at an impromptu interview.

Direct professional benefits aside, I think the main reason to attend Grace Hopper is the feeling you get when you are sitting in an auditorium with almost five thousand other women interested in computing. It’s a nice change from the many times I have attended talks at conferences and been the only woman, or one of very few women, in the room. The memory of being surrounded by thousands of technical women is one I hope I can recall next time I’m feeling out of place at a conference.

Carberry: Do you have to be a woman to attend GHC?

Oesper: Absolutely not. Anyone who is committed to both recognizing women in computing and figuring out how to increase the number of women that stay in the field is welcome to attend.

Hilliard: Though not many men attend, the ones that do are awesome! Check back on the Brown CS Blog for a post from our own Connor Gramazio who attended this year!

Carberry: Was it all work and no play?

Oesper: Funny you should mention that.  Anita Borg, one of the founders of the conference, LOVED dancing. So, the closing night of the conference always includes a dance party! You should check out this brief documentaryabout her. 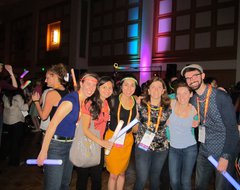 All the graduate students at the closing celebration

Hilliard:  It’s fun to see hundreds of women (and a few men) celebrating and dancing up a storm!

Carberry: What's the plan for next year?

Hilliard: 2014 will mark 20 years since the first Grace Hopper Conference. I wouldn’t be surprised if there were over 6,000 participants next year!

Oesper: The conference will be held in Phoenix.  We hope to send even more students to GHC than we did this year!