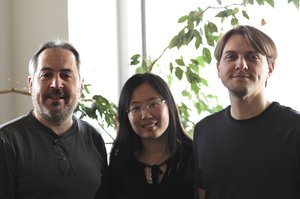 At the Information Visualization conference (InfoVis) in October, Ph.D. student Hua Guo presented a poster about her novel tool, BraiNet, which visualizes the graph of neuron projections between different brain parts. Her poster, titled "Visualization to Facilitate Structured Exploration of Published Findings in Rat Brain Connectivity", discusses findings from an ongoing collaboration with brain scientists both at Brown and Stanford. One goal for the tool is to help her collaborators generate better hypotheses about the brain circuit by providing more insightful graph visualizations than existing techniques. 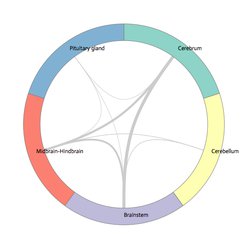 Radial visualization of brain connections in BraiNet. Ryan Cabeen, another Ph.D. student in the Visualization Research Lab, is exploring new techniques for mapping anatomical brain connectivity, or how the brain is physically wired, with diffusion magnetic resonance imaging (MRI). These techniques address the directional structure of white matter fibers that is captured by diffusion MRI, which can pose a challenge to traditional image processing tasks, such as interpolation, filtering, and segmentation.

In September, Ryan traveled to Japan to present two papers at MICCAI, titled "Estimating Constrained Multi-fiber Diffusion MR Volume by Orientation Clustering" and "White Matter Supervoxel Segmentation by Axial DP-means Clustering". These papers explored ways that machine learning and directional statistics can be used to perform model-based image processing. Cabeen sees potential medical applications for these techniques in the future. "We plan to apply these methods to some of our group's collaborations in clinical neuroimaging studies, which aim to map anatomical changes in brain white matter in both health and disease," Cabeen said.

With these projects, Dr. Laidlaw is excited that his lab is tackling the domain of brain connectivity visualization from different directions. "It's been great to see some of our lab's earlier work in diffusion MRI processing and analysis extended by Ryan and Hua," said Laidlaw. "Ryan's work has the potential to make diffusion MRI accessible to more doctors and patients, and Hua's work moves up a level of abstraction to help scientists in understanding the bigger picture of brain connectivity."