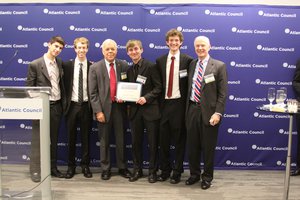 On Friday and Saturday, February 7 and 8, the Atlantic Council hosted their second annual Cyber 9/12 Student Competition in Washington DC. It is an event designed to give students a taste of the challenges that face White House policy makers when responding to national cybersecurity threats.

Twenty-two teams participated in the event representing twenty-four universities from as far away as Turkey and Estonia. A team of four Brown sophomores made an excellent showing. They not only advanced to the semifinal stage, they won the prize for Best Teamwork against much older teams. The “Brown Secure” team consisted of Samuel Brebner, Jason Ginsberg, Dan Meyers, and Jared Schober. I was faculty coach. Brown Secure was the youngest team to advance to the semifinal round and probably the youngest team in the competition.

The competition consisted of three rounds in which students formulated four alternative responses to a crisis described in an intelligence brief. In each case teams had ten minutes to describe their responses and took ten minutes of questions. Preparation time for the first round lasted one week, the second twelve hours overnight, and the third thirty minutes.

The Brown students benefited greatly from the trip, met prominent national security experts, and established a strong reputation for Brown at this event.