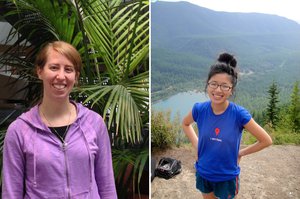 Brown University’s Molly Long and Layla Oesper have just won the Google Anita Borg Memorial Scholarship for their excellence in computing and technology and their status as active role models and leaders in the field. It’s accompanied by an award in the expected amount of $10,000 and an invitation to the Annual Google Scholars’ Retreat. Layla and Molly (and fellow Brown University student, Eden Weizman) join multiple previous BrownCS recipients of the scholarship, including Tess Avitabile in 2010.

“The more I learn about Anita Borg,” Layla shares, “the more I admire her and the work she did to help promote diversity in computing. I think this is the third time I’ve applied for this scholarship, so I’m just absolutely thrilled to have been chosen as a recipient this year.”

A key qualification for the scholarship is leadership in the community and proven experience with inspiring other women to enter the field. Perhaps Molly’s most notable success in this area is the creation of Brown’s first annual hackathon, an event in which programmers and others collaborated over the course of a weekend to create new software.

“Working with Molly was amazing,” comments Mackenzie Clark, a co-founder of the event. “She is incredibly hard-working, responsible, and dedicated to everything she does. I can’t think of anyone more deserving of this award.” A few numbers support these accolades: 35% of hackathon attendees identified as female, 75% had never been to a hackathon before, and 100% said that they would return next year.

Professor Tom Doeppner agrees. “I'm delighted to hear about Molly's award,” he says. “She's been extremely enthusiastic in pretty much everything she does, acting as a role model not only for women, but for all CS students. She's served as a UTA, she was the co-organizer of Hack@Brown, and now she's the co-organizer of a CS senior yearbook.”

When asked to describe Layla’s achievements, Associate Professor Amy Greenwald mentions her work on the BrownCS Diversity Committee, her efforts to improve recruitment of women, and both the design and implementation of key departmental diversity initiatives. Citing Anita Borg’s ambition of creating male/female parity in the field by 2020, Amy says, “If we had 1000 Layla’s all working toward this goal in their spare time –like she does– I honestly believe we could do it!”

Associate Professor Ben Raphael is equally enthusiastic: “I’m delighted that Layla's accomplishments are being recognized by the Google Anita Borg Memorial Scholarship. Layla is a first-rate researcher and teacher of computer science and computational biology. She also works tirelessly to promote women in computer science, spearheading diversity initiatives in the department and in our research group. These exemplary qualities would make Anita Borg proud.”

The scholarship will only enhance the already remarkable work of the two women. “This award was so competitive and it brings so many opportunities with it,” Molly concludes. “I’m ecstatic!” Her efforts and Layla’s will no doubt provide opportunities for an entire generation of colleagues present and future.