Each speaker covered a different aspect of moving robotics forward in terms of theoretical ability and practical integration in society. Holly Yanco described the NERVE Center, a 10,000 square-foot indoor testing center for mobile robots. The Center contains a National Institute of Standards and Technology (NIST) compliant course as well as proprietary water and indoor rain environments.

Nicholas Roy spoke about accurate SLAM (simultaneous localization and mapping) with small drones, and his practical implementation of such techniques during his stay at Google X. While there, he lead Project Wing, a drone delivery program.

Joe Jones, a veteran of both MIT and iRobot (the company behind Roomba), described his new company, Harvest Automation, and its goal to automate jobs in the world's greenhouses and nurseries. Specifically, they address the nurseries’ need to evenly spread thousands of potted plants across a surface. Where this job is considered to be one of the nursery's most unpleasant, Harvest Automation's fleet of HV-100s have moved over 7 million plants without complaint. 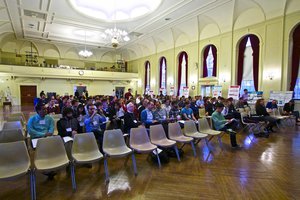 Attendees prepare for the next speaker

Event sponsors were private robotics firms interested in facilitating skill transfer between groups, and recruiting students and researchers looking to move to industry.

Turn-out was larger than expected, with over 150 people interacting at the venue, Brown's Alumnae Hall. "The space was amazing," said volunteer coordinator John Oberlin. "It really allowed for a diversity of research interests to intermingle." His favorite moment? "My favorite demo was a group who were 3D printing using aerospace resins." 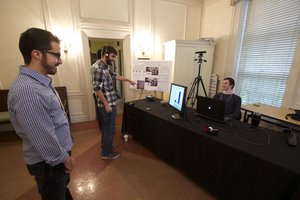 Overall, the hosts were very pleased with the strong response. "I think it was really fun," said Stefanie. “I think it's good for undergrads and new graduate students to experience a conference, before they've necessarily published a paper. It shows what research is all about, gets them plugged in."

Many attendees were also pleased that children and families were invited. Stefanie’s two-year old son, Jay, had a great time at the conference. “I’m so excited that he’s excited about robots. He loved seeing Keepon and Dragonbot, and he got to drive Kinova’s Jaco arm.”

Keynote speaker Nicholas Roy, one of several attendees who wouldn’t have come if families hadn’t been invited, brought his wife and three kids to NERC. Their whole family really enjoyed the event. "The kids now believe that all robots come from Rhode Island," he said later. 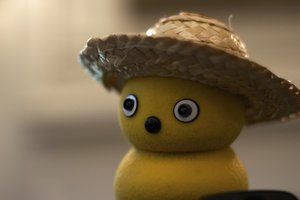 A Keepon robot, which teaches empathy to children, lost in thought as it ruminates on the human condition

Brown Rated #3 In USA For Software Developers At Startups