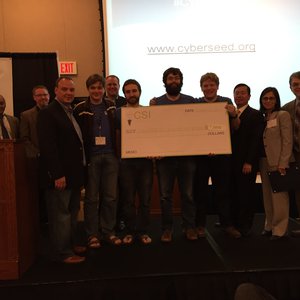 Last week, two teams (synners and Br0x0wn) from Brown University’s Department of Computer Science extended Brown’s reputation for cybersecurity excellence in a competition at the University of Connecticut. They took first and ninth places, respectively, at the inaugural Cybersecurity, Education, and Diversity Challenge Week (CyberSEED). (Some results are still being tabulated.) “It was a very elaborate and well-crafted competition designed to get students interested and involved,” comments Professor John Savage, their faculty advisor. “We were in the top ten from the moment the leaderboard appeared.”

“I’m very happy,” says Adjunct Assistant Professor Bernardo Palazzi, who mentored the students and taught several of them CS 166: Introduction to Computer Security. “Both teams did extremely well. I’d like to thank John for supporting them, and particularly for suggesting that I announce the competition to CS 166 students.”

John agrees: “They did an incredible job. It’s interesting to note that three of them have served as SPOCs [systems programmer, operator, and consultants] here in the department. I’m proud that we offer that unique combination of formal instruction and hands-on learning, and I’m sure it was part of their winning formula. All of the students told me how much they enjoyed the event and carrying the banner for Brown CS cybersecurity research and education.”