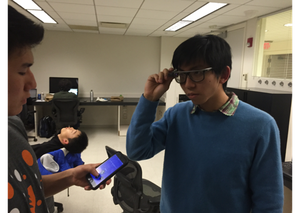 Brown University computer science concentrator Aaron Gokaslan ’18 and a team of his peers have just won a Best iOS App award from Apple at the recent HackPrinceton hackathon, earning an iPad Mini and the envy of several hundred of the country’s best young computer scientists. The event, which has been held semiannually for a number of years, challenged students of all levels to join together and create unique software applications.

“I was confident,” Aaron explains, “but the competition was intense. I truly enjoyed it, regardless of the outcome, but I only slept a few hours that weekend. I was actually pretty surprised that we won!”

For this particular award, participants were required to design the best all-around iOS application that relied solely on software as opposed to hardware. The criteria included functionality, design, and ease of use. Aaron and his teammates won for their application, Rabal, which functions as a universal translator.

“The name is an acronym of our team’s first names: Ryan Dunn, Aaron Gokaslan, Bryan Ngadimin, Alan Liu, and Leo Shimonaka,” Aaron explains. “Except over Facebook, I didn’t know any of my team members before I arrived, and I met two of them over Chinese food the first night!”

Rabal uses text-to-speech APIs (powered by Nuance) to transcribe and then translate audio (powered by Google Translate). A server then posts translations on web pages that are accessible from any Internet-enabled device, including wearables. The application currently features eight languages, and Aaron notes that it could easily be extended to at least twenty-three.

“I had a great time meeting new people and seeing old friends,” Aaron says of the event. “It was exciting throughout: we didn’t even have a working model until a half-hour before the submission deadline and had to re-purpose one of my teammate’s websites to get the setup working. There were some really innovative hacks, and I’m proud that we competed so well among them.”