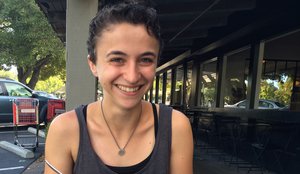 “This year’s nominees,” writes the CRA’s Helen Vasaly Wright, “were a very impressive group….several were authors or coauthors on multiple papers, others had made presentations at major conferences…Many of our nominees had been involved in successful summer research or internship programs, many had been teaching assistants, tutors, or mentors, and a number had significant involvement in community volunteer efforts.”

“It’s such an honor.” says Danaë. “Especially since I have just applied to graduate school, it’s really exciting to have this affirmation." She goes on to explain that her application for the award focused on her recent research, which she began with classmates in Jeff Huang’s graduate seminar. Their experiment (crowdsourcing data about professors in the top 50 computer science graduate programs), which received considerable attention on the Web at Slashdot and elsewhere, led to the creation of a database as well as a research project to analyze the strategies used.

“This award reflects Danaë’s achievements in multiple research projects and commitment to research in human-computer interaction,” says Jeff. “We’re proud of her accomplishments in industry and research internships, academics, and her contributions in the department in teaching and student mentoring.”

Work with Jeff led Danaë to Michael Bernstein, who oversaw her research into the identification, quantification, and explanation of sources of Internet bias. This is what she calls the “dark matter” of the Web: the way in which the browsing activity of many users is “overshadowed by the small subset that’s archived by search engines such as Google” and fails to reflect collective human experience. "For me, it’s really about addressing a distorted picture of the world," she explains.

“It’s so exciting to receive this honor, and the biggest takeaway for me has been the support and encouragement from my classmates and the faculty,” says Danaë, even crediting Professor Shriram Krishnamurthi for taking to social media to share the news of the award. “I’m so thankful to Anna, Jeff, Michael, Ugur, and everyone else for their support.”

Now she looks forward to pursuing her research in human-computer interaction toward a PhD in computer science, where Danaë will continue using computing to allow us to more effectively use technology in a nuanced and changing world.