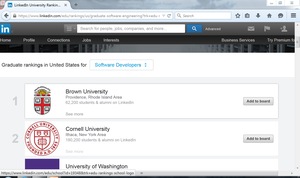 For more stories on why Brown CS is a great place to study, check out our Praise for Brown CS page here.

Only six months after receiving a ranking as the country's third best school for software developers at startups, Brown University's graduate program in Computer Science has been rated by LinkedIn as the country's best graduate program in Computer Science for producing software developers at top companies. Once again, Brown CS has overcome competition from universities whose LinkedIn presence is four times the size of Brown's.