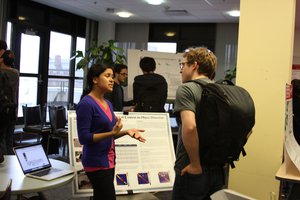 "The primary educational focus of undergrads is classes," says Professor James Hays, "but research can also be enormously educational. Research allows undergrads to collaborate with faculty to make new discoveries, to expand the boundaries of computer science, and ultimately to improve people's lives. Research can be intimidating, though – it’s less structured than courses, there's no way to know whether you're on the right track or headed into a dead end, and the peer review process can be frustrating. Still, many of our best and brightest undergrads are involved in research and we thought this wasn't visible enough."

The solution that Brown CS developed, led by Hays, Professor Stefanie Tellex, and meta-RAs Chloe Kliman-Silver and Surbhi Madan, was the inaugural Undergraduate Computer Science Research Symposium, which was held on Friday, April 10, 2015. Dozens of students, faculty, and staff attended, talking with more than twenty students or teams who shared posters and gave demonstrations of their work.

“We wanted to show off Brown CS research,” says Chloe, “but also encourage students to do research of their own and begin to build some resources for them. It was so nice to see the submissions start slowly, then begin to pour in. On the day of the symposium, people were asking questions, engaging with each other. Professors were getting interested in students and students were approaching professors.”

Two internal and two external judges reviewed the entries and deliberated at length, eventually awarding first place to Jie Ying Wu. (You can watch a video of her here, one of Miles Eldon here, and one of Danaë Metaxa-Kakavouli here.) After taking a class on medical image analysis, Jie Ying explains, she became interested in predicting abnormal bone growth in the skulls of fetuses. By analyzing the shapes depicted in ultrasound images, detection of abnormal growth can happen early, making it easier to correct.

“It was really interesting to get so much feedback at the symposium,” Jie Ying says, “and some of the people working in computer vision had great ideas that I hadn’t thought of. Curvature is a second derivative of shape, so by measuring the derivatives of how quickly the skull shape changes, we see how sharp the turns are, which could be indicative of abnormality.” There’s more room for interdisciplinary work, she maintains, citing the collaboration between Assistant Professor of Engineering Derek Merck, Professor David Laidlaw of Brown CS, and Brown CS PhD candidate Genevieve Patterson as a successful example. “This symposium means more collaborations, more interest, and maybe someday a second course in the sequence that got me started on this project. I’m excited."

The organizers of the event agree. “The undergraduate teaching program is so well-developed,” says Chloe, “and we want to mirror that and enrich what we’re doing with undergraduate research.”

"So many of our undergraduates are really superstars and we wanted to give them the recognition they deserve," says James. “I was very impressed with their projects. Not only is it interesting research, but the students were able to explain the significance of their work clearly and put it in context. We’re definitely doing this again next year, and taking other steps as well. The end goal is to get undergraduates to see the benefits of research, get started on research earlier, and form great collaborations. It can be an incredibly rewarding path for them to take.”