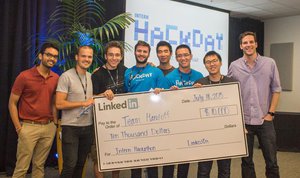 At LinkedIn’s 5th Annual Intern Hackday this summer, Brown CS graduate student Christian Mathiesen and his teammates competed against 75 other teams to take first place and bring home the $10,000 grand prize scholarship. Their winning design, “Handoff”, is a Google Chrome extension that allows multiple users to share online accounts without compromising each individual’s login information. Services currently supported by Handoff include Netflix, the New York Times, and HBO, among others.

For Christian, the LinkedIn Hackday was a valuable extension of the community fostered by Brown CS. “Our team consisted of students I had only known for a few weeks, but somehow we still managed to coordinate, plan, and build our product in less than 24 hours,” he says. The consequent strong bond between team members is “one of the reasons why the Brown CS community also encourages hacking,” suggests Christian. “It’s not about winning of the product itself. What matters most are the relationships you build.”

For Team Handoff, the relationship built during those 24 hours continues beyond the LinkedIn headquarters in Mountain View, California. The group is continuing development on the extension, rechristened “Asterisks” in honor of password fields, which will be released as a beta later this month. You can read more about the full extension on their website and/or download the extension directly from the Chrome Web Store. All five group members remain on board: Eric Brownrout (Northwestern), Clement Fung (Waterloo), George Lok (Harvard), Fernando Trujano (MIT), and Christian.

Read more from the team members themselves over at Medium to hear how it all started with a GroupMe message. The official LinkedIn blog release can be found here.