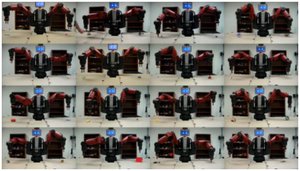 Their challenge to the robotics world? Help us scan and manipulate one million objects.

Last week, John Oberlin, Maria Meier, Tim Kraska, and Stefanie Tellex of Brown University's Computer Science Department were featured on the Computing Community Consortium (CCC)'s Great Innovative Ideas blog for a paper ("Acquiring Object Experiences at Scale") that was one of the winners at the recent Blue Sky Ideas Track Competition at the AAAI-RSS Special Workshop on the 50th Anniversary of Shakey: The Role of AI to Harmonize Robots and Humans during the Robotics Science and Systems (RSS) 2015 Conference.

In their paper, the researchers propose wide-scale deployment of Ein, their recently-developed software that runs on Baxter, a two-armed manipulator robot. By running autonomously, Ein can scan objects without human interaction during downtime that would otherwise be wasted: if  300 research Baxters run Ein continuously for 15 days, the result would be one million objects scanned, eventually allowing roboticists to begin to tackle category level inference in object detection, pose estimation, and grasp proposal in ways that have never been done before.