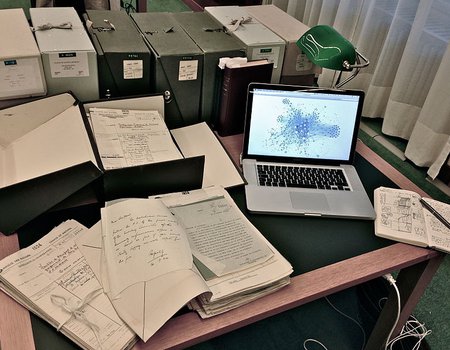 A new article published by Medium shows the importance of applying computer science to various disciplines, as well as details on an interesting connection between Brown CS and one of the first digital historians.

Brown CS faculty member Maurice Herlihy’s father is the center of this captivating story. David J. Herlihy was a historian and early demographer of Medieval European populations. Maurice described his father as a creative man who always had a talent for knowing how to ask original questions that others wouldn’t think to ask. “Most people were interested in how royalty lived during the Middle Ages,” says Maurice, “but my father would ask what it was like to be a poor person, or a woman. He was interested in the everyday life of the common person.” David was a pioneer in the use of computers to analyze socioeconomic trends and provided unprecedented social and economic insights to our understanding of the past.

David went on to become a professor at Brown, along with his wife Patricia Herlihy. Maurice said Brown was the perfect opportunity for both of his parents to do what they loved. His mother, Patricia is still at Brown as Professor Emerita of History at the Watson Institute for International and Public Affairs.

Maurice said his father inspired him with his approach to research and the way he made learning fun. “He has a lot of respect for STEM fields and saw the everyday importance of computers, even at a time when it was considered crazy for people in other disciplines, like historians, to use them."

David’s work as one of the first digital historians says a lot about the ability of CS to benefit other disciplines. “Computational thinking is a powerful way to address humanities and has enormous importance in all areas,” says Maurice.