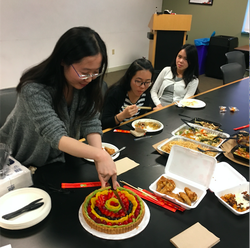 Brown University and Brown CS benefactor Julie Nguyen has recently passed away, but she leaves behind an amazing story of success and has inspired a new generation of women and underrepresented minorities in CS. Julie immigrated from Vietnam to the US in her late teens and began to study computer science and engineering. After school she worked her way up to becoming VP of Ford Motors and later quit to start her own billion-dollar company. Julie was a close friend of Brown University and served on the Brown University Board of Trustees. In addition, both of her children were educated at Brown.

Brown CS professor Sorin Istrail, who holds a Chair Professorship named for Julie Nguyen Brown, along with PhD student Hua Guo and medical student Natasha Nguyen, recently held an amazing event to honor the life of Julie Nguyen. “I wrote to Julie's husband, Jim Brown, about this idea of having a get-together with the Asian female graduate students to talk about Julie and for them to hear the story and get inspired. He responded that indeed it was exactly what Julie would want me to do: Julie who was all her life a force for good, helping others to shine, would be very happy,” says Sorin.

The event was a great success. Everyone enjoyed delicious Chinese food and Pastiche pie and Sorin presented Julie's life story, which was extraordinary and uniquely inspiring to those in attendance. At the end of the celebration everyone started drawing beautiful images and words on the white boards to show what Julie meant to them. "I've always been looking out for role models - women who are successful and influential in STEM. I think role models are very important, not because that we need to learn ‘secrets to success’ from them, but because we need to see and be inspired by what can be achieved by someone who is like us. Being the one of the few female minority entrepreneurs in the male-dominated automobile industry, Julie Nguyen is a great role model,” says Hua.