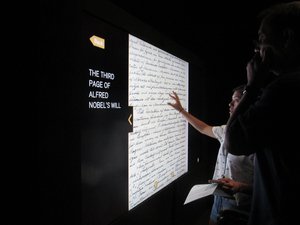 To see the many photos that accompany this article, please click here and scroll to page nine.

Created by a group of undergraduate researchers in the Graphics Lab working under the direction of Professor Andy van Dam, Touch Art Gallery (TAG) is a Windows 8/8.1 and Web application that allows content aggregators, including museum curators and educators, to compile, contextualize, and share digital collections of artworks and manuscripts, including artworks that for reasons of size or fragility can not be viewed in person.

During Winter break, junior Carlene Niguidula and her family (Carlene's father, David Niguidula '85, is a former student of Andy) were in Singapore, where they went to see the Nobel exhibit at the ArtScience Museum. They went at the beginning of the day so as to avoid the crowds that came later on.

MHS has mounted an exhibition ("The Private Jefferson: From the Collections of the Massachusetts Historical Society") that runs from January 29 through May 20, 2016, featuring TAG-based interactive digital experiences in every exhibition room. The designers used standard TAG facilities to explore the collection through explanatory interactive tours and multiple sub-collections, which include journals, correspondence, architectural drawings (Jefferson designed the University of Virginia as well as his own home at Monticello), almanacs, law treatises, a bibliography of his library, his first personal draft of the Declaration of Independence, farm and garden plans and diagrams, and documentation about his slavery practices.

The MHS describes the goal of the exhibit in this way: "Thomas Jefferson has been described as an 'American Sphinx.' As the drafter of the Declaration of Independence and the third President of the United States, he is one of the most famous Americans. Nevertheless, he is an enigmatic figure: an intensely private man who spent more than thirty years in public service; the spokesman for popular democracy who, at the same time, held hundreds of men, women and children as his personal property; an urbane, widely-travelled, and widely-read exemplar of the Enlightenment, who appeared happiest in a meticulously-planned environment that he had created for himself in the back country. The exhibition aims to pull back the veil and uncover the private Jefferson."[2]

Imagine a two-inch stamp from the Himalayan Buddhist kingdom of Bhutan that plays a folk song[1], or a series of stamps that tell a story of how a country's political institutions have evolved over time.

These stories and the context from which they arose are the subject matter of an exhibit ("Thousands of Little Colored Windows: Brown University's Stamp Collections") that will be on display at the John Hay Library from February 10 through May 13, 2016. Hours are listed at http://library.brown.edu/hay/. The website for the exhibit, which features TAG, is http://library.brown.edu/stamps/.

The exhibition was developed by students in Professor Steve Lubar's course, AMST 1510 Museum Collecting and Collections, which focuses on the ways that museums care for their collections, make them available, and use them for research and education. In particular, students worked with approximately 675 stamps from Brown University Library's historic and extensive set of stamp collections, researching their history, cataloguing them, and then creating the exhibition.

Each student chose 30 stamps to ingest into TAG, creating and assigning metadata to each stamp to fill TAG with educational information. Then, some students developed narrative tours with their stamps. "In the case of the Bhutan stamp,” explains Teaching Assistant Sarah Dylla, “student Anna Meyer used the tour as a platform to allow visitors to access the audio contained in these unconventional stamps. The tour plays audio from two versions of the stamp: a brief history of the nation of Bhutan, and the Bhutanese national anthem. There is transcribed text and a selection of images of Bhutan to accompany the audio."

The principle focus for TAG in this exhibition was on how stamps reflect political change over time. Students had many sessions discussing the classification issues behind the types of metadata that would be appropriate in this context, learning the hard lessons about the terminology constraints of a targeted exposition versus the development of a resource base whose purpose is general exploration. The final metadata categories provided topics about the countries, stamp colors, and subject matter that are used for search in the collection.

“The project gave the students a good taste of the complications of creating a digital interactive device for a museum,” says Professor Lubar. “There's creating the metadata and thinking about how people think and search. Then there are the constraints of the platform itself: what can we put in this and how will our categories and content (i.e. stamps) actually align with how TAG functions. How will that work in the gallery space? Online you often want to have many different ways of exploring.  In an exhibit space you want to narrow it down, to present specific experiences: here's the point we're trying to make, here are some objects to look at."

For the last four years, TAG and its predecessor LADS (Large Artwork Display on the Surface), which were developed by undergraduates in Andy van Dam's Computer Graphics Group, have been used in courses at Brown that range from Professor Massimo Riva's two courses on panoramas, Professor Sheila Bonde’s Global Art and Architecture and The Medieval Monastery, and most recently, Professor Steve Lubar's Museum Collecting and Collections course described above.

TAG's original design goal was to allow users to explore artworks that were too fragile or too large to be seen in person. Brown's Garibaldi panorama, which is a 4.5' x 260' document painted on both sides that depicts the life and exploits of Giuseppe Garibaldi, is an example of artwork that is both too fragile and too large to be displayed.

During early November of 2015, sophomore Trent Green, the TAG team leader, went to Singapore to install the TAG Nobel exhibit at the ArtScience Museum. It was his first trip outside of the US, so he took more than 100 pictures of what he saw in Singapore as well as documenting the installation process within the museum. By the time the exhibit closed, it had been seen by tens of thousands of visitors.