When I got to Brown as a freshman, I knew I wanted to dive right into the startup scene. Since I can remember, I’ve always loved creating things and working on projects with teams. I had come to the first Hack@Brown as a senior in high school and it was a no-brainer to join the organizing team once I got to campus. I was also part of the first iteration of the Innovation Dojo, a semester-long workshop series for underclassmen by the Brown Entrepreneurship Program, and I immediately joined Brown EP as well.

Most of these initiatives were new, and I felt the entrepreneurship scene at Brown was catching sparks. I went to the fall career fair and there were a lot of big companies, but I felt it wasn’t as welcoming for freshmen, and I also didn’t see a clear way to apply to startups. I really wanted to feel the rush of working at a VC-backed startup, so through the hackNY Fellowship, I was fortunate to end up interning at a startup in NYC for the summer.

I felt Startup@Brown was a great way to expose more students to this thrilling world of startups and kick off the year by trying to start a fire.

Startup@Brown relies on a simple premise: connect students and startups. It’s a single idea, but the intention is threefold. First, demystify the process of founding a startup. Second, enable a great recruiting starting-point for both startups and students. And third, but not least, inspire, grow, and bring together the startup community on College Hill. We structured the conference around these goals.

Demystify The Process Of Founding A Startup

There’s been an explosion of interest on the startup world. We only had spots for 250 students, but when we opened registration for a bit over 2 weeks, more than 500 students from Brown and RISD responded. In many of the responses and conversations, students said they had startup ideas but that they would like to learn more about the process of bringing them to reality. 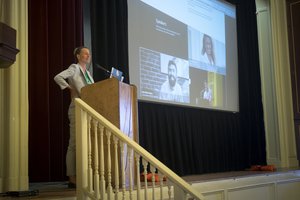 Eveline Buchatskiy, Director of Techstars Boston, gave the opening keynote on the startup journey — a playbook on creating a startup

We didn’t want Startup@Brown to be another 300-person lecture (apart from the keynote), so we took a more dynamic yet intimate approach, mirroring the idea of closeness and face-to-face contact in startups. We had workshops in which 20-30 students learned from startup leaders, from founders and CTOs of startups such as Teespring, Casper, and Figma, to venture capitalists such as Y Combinator, Techstars, and Andreessen Horowitz.  In total, we had 17 workshops ranging from “Building Your First Physical Product” to “Funding 101” to “User Experience”. Kevin Hale, partner at Y Combinator, one of the top startup incubators in the world, also held office hours for student startups. 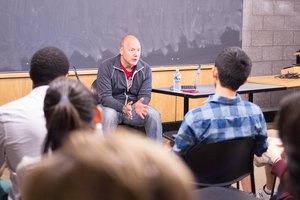 Allan Tear, co-founder of Betaspring, giving a workshop of the six most common entrepreneurial mistakes and how to avoid them

It’s hard for startups to access top talent the way big companies do. Startups have way less time and money to spend on recruiting than corporations. Big companies have full-time recruiters and startups have founders focusing on their product.

And for students, the application process to work at small startups is shrouded in mystery, if not nonexistent. In contrast to larger organizations, startups have no information about intern programs on their websites and only a few have visible job postings. Career fairs are usually filled with large companies and little to no startups.

Therefore, right after the opening keynote we had the Startup Fair, a startup-only career fair. Students had a chance to walk around, meet with startups and learn about their work, challenges, and career opportunities. Similar to a hackathon, students didn’t have to bring their resumes to each table — a student could choose to have her resume shared with all the companies before the event. 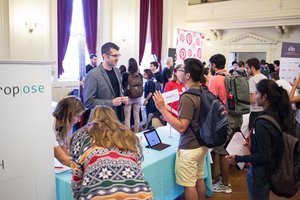 The Startup Fair, with Jerry Talton, CEO of Apropose, a data+design company, talking to students

Apart from the Startup Fair and workshops on Saturday, on Sunday there were small-group conversations; startup representatives (engineers, designers, founders) and six to ten students sat in a circle and the students could ask questions and hear stories from the leader for 30 minutes, getting a better sense of the different company cultures. 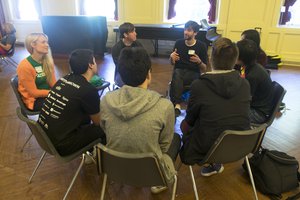 Inspire, Grow, And Bring Together The Startup Community On College Hill

The reason why some people go to Silicon Valley to start companies is because of the community. College Hill and Providence have an enormous potential for creative endeavours; it’s a very fertile ground that has cultivated many great entrepreneurs, startups, and social change, but we believe there’s always room for growth. 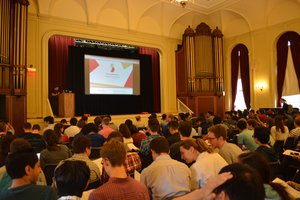 300 Brown and RISD students together for the opening keynote, with Valentin Perez ‘18 on stage

Many students said one of their favorite moments was meeting and interacting with like-minded people. Bringing close to 300 students and startup leaders together for a weekend in September made for a great start of the year.

Naturally, many of the founders, engineers, and designers were alums, and they brought plentiful experience and enthusiasm back to campus. The help of alums was one of the main catalysts for Startup@Brown: we were thrilled to see over 20 alums from the different startups back on campus.

We sent a survey after the event where we got some feedback from attendees. 79% of the students are now more inclined to start their own startup, including six students saying they were starting one after Startup@Brown, and 97% would consider working with at least one of the startups that came. Feedback from the startups included that it was their “favorite career-fair” and that “the focus on startups was a huge win because every student was very engaging”.

Out of another survey we sent in January, 59% of respondents interviewed with at least one Startup@Brown startup, and 37% got offers for a summer internship, full-time job, or non-summer internship.

The close interactions created new friendships and now a stronger startup community vibrates through College Hill. There has been a snowball effect: out of conversations with Y Combinator, a new Brown CS startup class, csciStartup, is being offered in Spring 2016, taught by Prof. John Jannotti, supported by Y Combinator, and with guest lectures from some of Startup@Brown’s speakers.

Startup@Brown was hosted by Brown University’s Department of Computer Science and organized in collaboration with the student-clubs Hack@Brown and Brown Entrepreneurship Program. We owe special thanks to alums: Startup@Brown wouldn’t have been possible without you. 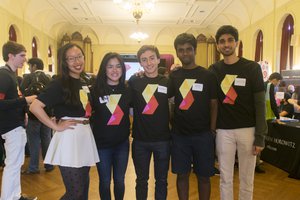