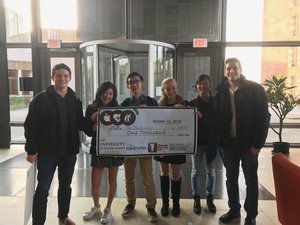 At many hackathons, teams assemble according to shared interests among people who have just met. It's part of the appeal. But sometimes, you just want to hack with people that you already love working with. Two weeks ago, the TAs of CS 15 (Katie Chu, Grant Fong, Sarah Kim, Hannah Tipperman, Adrian Turcu, and Zach Kirschenbaum, all sophomores) formed a team called "The Balcony" and took second place at HealthHacks RI, a 48-hour hackathon focused on issues in health, wellness, diet/nutrition, and aging.

Working alongside fellow students, engineers, researchers, physicians, entrepreneurs, mentors, and others, the Brown CS team's challenge was to create a solution for the health and wellness industry. Their answer was an iOS app called CareConnect that helps streamline communication between caregivers and family. In addition to bragging rights, their second place finish earned them a $1000 prize.