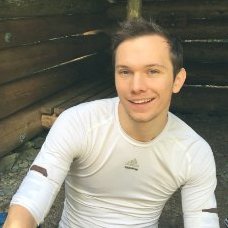 Even though he now continues his work professionally, Miles Eldon came to robotics research by way of a friend. He recalls that his friend, "was so excited about it that I got interested in finding out more. I met with Tellex, talked about opportunities in her lab, and at her suggestion, took her graduate seminar. After how much I enjoyed the work and style of that class, I knew I would enjoy working with her on more long term research."

He then worked on a project to have a robot interpret and respond to natural language and gestures. "This was really exciting as an undergrad," he says, "because I did a lot of the initial work independently. I worked occasionally with PhD student John Oberlin when I started wanting the robot to respond to requests, since he was writing all the pick and place code for the Baxter robot. PhD student David Whitney took my language and gesture work, and built upon it, adding contextual information like what a user was doing, which would inform future requests to the robot."

The two later combined their work into one paper and were published at the International Conference on Robotics and Automation in 2016. Professor Tellex underscores Miles' achievements: "Miles was a huge asset to my group as it was getting started. He was a leader among the students, and I still today have undergraduate students in my lab who were trained by students who were trained by Miles!"

Miles has furthered his passion for robotics by working on a surgical robotics project under Verily (formerly Google Life Sciences), which is focused on making minimally invasive surgery easier and more accessible. He comments on the transition by pointing out that: "I definitely use many of the skills I learned during my position as an RA, but it's very different from the research that I used to do. There are some robotic specific skills that transferred easily, like working with the Robot Operating System and designing operating modes that are safe around people, but the softer skills I developed by working independently on a project for a long period of time were also incredibly useful."

He contrasts this with undergraduate classes at Brown: "a lot of the base work is set up for you, and you tend to work on a project for a short period of time, but as an RA, I ended up spending a lot of time doing things on my own, like debugging why some third party software wasn't working with a new device nobody else in the lab had used, or maintaining software for over a year. Those were the skills that transfer most easily from an RA position to the industry."

He notes that being an RA gave him not only the skillset but also the ardor and requisite contacts. "After being an RA at Brown," he explains, "I knew I wanted to work in robotics. I originally planned on working for a year and returning to grad school. I accepted a position at Google (working on Youtube). After I got rejected from the five graduate schools I applied to, I much more aggressively pursued a robotics related position, looking into small startups doing robotics work and also using contacts Professor Tellex had to find roles that were more robotics related. I started doing part time work with a robotics team at Google that I met through one of Professor Tellex's contacts, and through them, met the Verily team I ended up transferring to. My work as an RA didn't only help me figure out what I wanted to do, it also gave me Professor Tellex's expertise and contacts to actually end up where I wanted to be."