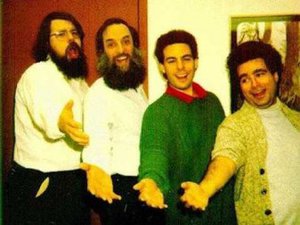 This is one for the record books, but somehow it's escaped widespread notice. It's no secret that Professor John Savage of Brown University's Department of Computer Science (Brown CS) wrote the first textbook on circuit complexity or that Professor Andy van Dam and his students, with Ted Nelson providing significant input, in 1967/8 created the first hypertext system on a standard commercial computer, Brown’s IBM System/360 mainframe. But few know that the voice of Professor Michael Littman was featured in the first email attachment ever sent, now 25 years old.

Working at Bell Communications Research (Bellcore) in 1992, Michael was a member of the Telephone Chords, a vocal quartet. Nathaniel Borenstein, who co-created the Multipurpose Internet Mail Extensions (MIME) standard that's still in use today, was also part of the group, and he enlisted their help to transform the barbershop standard "Let Me Call You Sweetheart" into "Let Me Send You Email", which humorously described how different kinds of files could be packaged electronically. A recording of the song was attached to a message and sent, and perhaps due to the vocal stylings of Michael (who sang lead) and company, MIME quickly became a standard. It's been used trillions of times since.

You can listen to the song here, or learn more at New Jersey Tech Weekly or the BBC. Thanks go to Assistant Professor George Konidaris, who may or may not be working on a four-part robotic rendition of the song, for bringing this story to light.