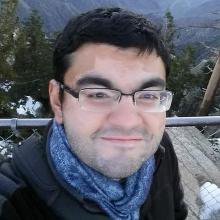 Gaurav Manek is a deep learning researcher at the Infocomm Research Institute in Singapore. Gaurav graduated from Brown last year after an accelerated bachelor's program in Computer Science. When asked how his research career began, he told Luke and the MURAs that: "I first heard about Professor Stefanie Tellex in the Computer Science department's Town Hall in Spring of my freshman year. I attended a talk by Professor Tellex later that semester, and was immediately drawn to her work. I finally started working at her lab in Fall of my second year at Brown, and only left when I graduated two years later. I was drawn into the role by the interest and enthusiasm shown by everyone in her lab, and because of my personal interest in human-robot interaction."

Guarav took a novel approach in Tellex's lab by focusing on language understanding. A common problem when humans and robots are collaborating on some task is to refer to a particular object in a shared space. We do this all the time with other humans such as: "Oh, could you please pass me the salt?" or "The medicine is in the cabinet above the sink, in the bathroom near the kitchen." Gaurav notes that "humans are not great at producing and understanding these expressions. My work was to design an algorithm, based on earlier work by Prof. Tellex, to parse these referring expressions while a human is talking. There are previous algorithms that can do this, but none could be given the input, word-by-word, and have it give an updated guess after each word." Once Gaurav paved the way, more students have continued projects working on that problem. He mainly worked with Professor Tellex, but regularly collaborated with other URAs, occasionally with graduate students, and even Professor Tellex's post doctoral student. Professor Tellex praised Gaurav with: "Gaurav did a strong undergraduate thesis that showed nice results with an incremental parser and advanced the state of the art in our group for language understanding."

Gaurav has continued to apply the skills that he learned as a URA during his life after Brown. He closed with, "My time as an RA has convinced me that research is the career for me, and I hope to pursue a PhD program in the next few years." We look forward to what else Gaurav will accomplish!