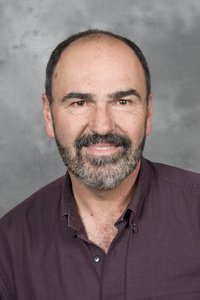 Today, a hand-crafted desktop machine with a Max Built logo is one of the CIT’s most familiar sights. They’re all the work of Senior Electronics Technician Max Salvas, who’s retiring next week after spending more than half his life with Brown CS. “Things looked a little different in 1983,” he says. In those early days, Max explains (it’s hard to imagine in an era where many of us have a laptop, a desktop, a smartphone, and maybe a tablet), large segments of the Brown CS community didn’t even have a computer of their own.

Initially working for Dave Durfee, one of Max’s first tasks was to install a large batch of Apollo workstations in the Foxboro Auditorium of Kassar House. “It was quite a bit of work,” he says, “very meticulous.” This was a time in which replacing a single power supply required labeling every wire, an hour’s work, to avoid mistakes that could fry an entire circuit board.

The years that followed brought multiple hardware revolutions. The first wave of new machines consisted of about thirty Digital MicroVAXes, each with a thin Ethernet connection and 300 MB of storage. 1988, when the CIT was built, saw the arrival of Sun workstations. “We stuffed them into a room that was originally designed as a teaching lab,” Max remembers. “CRTs back then probably weighed about seventy-five pounds each.” In the wake of the Sun era, with Linux gaining popularity, Max provided the solution that earned him an award under the Staff Bonus Program for Extraordinary Achievement: custom-built desktops that would be routinely upgraded. In less than a year, more than 225 Max Built machines entered service, providing four times the computing power and twice the memory of the systems they replaced, at half the cost of store-bought models. We’ve been using them, upgraded each year, ever since.

“He was the one-man equivalent of Dell,” says Professor Stan Zdonik, who over the years has shared dozens of cups of coffee with Max and former Director of Information Technology Jeff Coady. “We became friends not just because of computing but because we all love tools and working with our hands. Max’s breadth of knowledge is incredible, and it goes far beyond computer hardware: he’s fixed everything from flat-screen televisions to electric staplers. He’s generous in the broadest sense, with his time and also his expertise. I honestly don’t know what we’ll do without him. There’ll never be another Max.”

Over a long career, what moments stand out? “For some reason,” Max laughs, some of his favorite memories stem from the computing and multimedia requirements of one Andy van Dam. Due to high enrollment, students attended one of Andy’s classes in both the Sun Lab and the Moon Lab, and in order for everyone to participate, Max worked with Mark Oribello and other students to refocus cameras, activate and deactivate microphones, and switch audio and video back and forth from room to room in real time whenever a question was asked.

“It was a very complex setup,” says Max. “There was always some issue or another, and we’d scramble to figure out what could have possibly gone wrong. It wasn’t perfect, but we got things to be as good as they could possibly be.” To enable one memorable skit, they switched seamlessly from a previously-recorded video of Andy walking down Thayer Street in a Darth Vader costume to the moment when he stepped into the classroom, still in full Sith regalia.

In another packed van Dam class, with multiple students crowding around each Apollo workstation and some even forced to sit on the floor, someone would inevitably disconnect a cable without noticing it. On a token ring network, this meant that everything would grind to a halt. Even with troubleshooting accelerated by switches that could bypass multiple computers at a time, Max felt the weight of hundreds of eyes every time he had to walk down a row and test each machine with a null modem. “There was plenty of pressure,” he says. “Even three minutes can feel like a very, very long time.”

Kathy Billings, TStaff Project and Financial Manager, remembers Max’s “surgical precision” as he recently transported every piece of the IBM GPFS filesystem cluster on a special cart that he’d chosen for the task. “Max is Max,” she says. “He doesn’t have anything to prove because he’s always gotten things done right. He always has a solution, and he gets along with everybody. He’s able to explain complex things without techspeak, he wants to help, and he’s calm. There have been a few times when I was in his office, ranting, and he always knew how to let go of things that weren’t important.”

Letting go of Max himself is going to be more difficult: Kathy says she’s happy that she’ll still see him and his wife socially, at concerts and meals in favorite restaurants. John Bazik, Director of Information Technology, is interviewing to find Max’s successor and already missing him: “Many times, we would’ve been lost without Max. He runs the whole hardware show, and he’s basically been a division unto himself for decades. From hundreds of Max Builts to the legendary Godzilla failure, when he found a hardware problem that even Sun wasn’t aware of, he’s saved us huge amounts of money. Max has gone so far above and beyond his job description that it’s hard to measure.”

But the days of stripping a Sun workstation down to the center plane and troubleshooting SCSI card by SCSI card are gone. “Things are different now,” Max says. “Changing components, or even upgrading components, it’s not the same as soldering them piece by piece. My soldering iron’s in the drawer!” But the constant change has been positive, and even had personal benefits. “The thoughts of the young are different. Being around students has made me more aware of how times and cultures change, and it’s helped me keep a younger mind. I still listen to WBRU! And I’ve just had a great time here, I’ve really enjoyed it.”

Max has always kept busy in his personal life as well: day-hiking, touring local breweries (Long Live Beerworks is next on his list), and playing the sport of kings. “We own golf clubs,” he jokes. “I wouldn’t say we golf.” After a vacation home in New Hampshire proved to be not enough of an adventure after a decade of ownership, Max and his wife bought a thirty-foot RV, and have plans to see Yellowstone, the South Dakota badlands, Mount Rushmore, and even range as far as Utah.

“Fast, good, and cheap: with Max, you can pick all three,” says Department Chair Ugur Cetintemel. “His skills and dependability are legendary -- we’ve all turned to him for help at some point. We’re very lucky to have had someone like him as part of our community for so many years.”

And now it’s almost time to say good-bye. Throughout an hour-long interview, everything has been quiet. Technology in the CIT, almost as if showing respect, has performed remarkably free of errors. But just as I’m getting up, we hear a quiet ring from a back-pocket cell phone. Someone needs help, and of course, they just called Max.