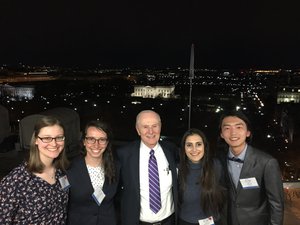 Brown CS students continue to distinguish themselves at hackathons and competitions nationwide. To read more on this topic, click here.

On March 17 and 18, team Brown Secure (composed of Brown University juniors and seniors Qiheng Chen, Clarissa Clemm, Sarah McNeil, and Alexandra Paul, and coached by Brown CS Professor John Savage) attended the fifth annual Atlantic Council Cyber 9/12 Student Challenge in Washington, DC. The event features teams from across the country and is designed to give students a taste of the challenges that face White House policy makers when responding to national cybersecurity threats. Winners of first prize in 2015 and a prize for Best Teamwork in 2014, Brown Secure faced even greater competition this year and advanced to the second of three rounds.

The competition began weeks in advance, when the students prepared a decision document for the President of the United States that responded to a complicated fictional scenario involving the United States, China, trade conflicts, and allegations of state-sponsored cyberwarfare. Each team had ten minutes to present their ideas orally, then took questions for another ten minutes. Judges included a wide selection of individuals from both the public and private sector: the US Departments of Commerce, Defense, Homeland Security, State, and Justice; the British Embassy; Deloitte Consulting; the Atlantic Council; the US Air Force; IBM; Google; Facebook; the New York Times; and dozens of others.

During lunch on Friday, students attended career panels led by experts from Leidos, the Atlantic Council, the US Department of Homeland Security, and other organizations. In the late afternoon, United States Representative Jim Langevin delivered a keynote address. That evening, the teams were hosted by the Baker & McKenzie global law firm at their offices on Connecticut Avenue, overlooking Lafayette Park and the White House. Speakers included David Lashway of Baker & McKenzie, Damon Wilson of the Atlantic Council, and Jennifer G Buckner of US Cyber Command. After the speeches, the teams qualifying for the next round were announced, and Brown Secure advanced.

A long night followed: faced with a new Intelligence Report, the team scrambled to prepare a new decision document, with students getting by on minimal sleep. The next morning brought a mock cybersecurity hearing before the House and Senate Armed Services Committees and then another presentation to a panel of judges. This time, Brown CS wasn't among the qualifiers for the final round, but they had already defeated numerous competitors and produced innovative solutions under highly challenging conditions.

"Brown Secure did an amazing job," says John. "There were more than forty opposing teams, and many of them contained individuals who are established professionals in the field. Our students were undaunted: they had a deep understanding of the issues, and they made strong recommendations, showing real skill at both preparing and presenting their proposals. I'm extremely proud of their achievement."

Photos below: the Brown Secure team and their coach by night, with a view of the White House; John and his students with US Representative Jim Langevin and Nick Leiserson, his Legislative Assistant; John's selfie of his team; Brown Secure presenting to the judges; and the winning team at the awards ceremony.