Click the links that follow for more news about Karen Smith Catlin, recent accomplishments by Brown CS alums, and their diverse career paths.

“Something about Brown CS influenced me,” says alum Karen Smith Catlin, whose distinctive career path has taken her from working at Brown’s Institute for Research in Information and Scholarship (IRIS) to Vice-President of Engineering at Adobe to a new phase as acclaimed author and speaker on inclusive workspaces. “It’s a fearlessness and an idealism that says, ‘If not us, then who? Let’s get this done.’ When you graduate with a CS degree from Brown, nobody can take that credibility away from you. That opened a lot of doors for me.”

So much of Karen’s career has focused on mentorship and positive connection between people that her advice to students looking for a more unusual career may come as no surprise: “Reach out to the people you might want to talk to! Get their insight and think about different product spaces, different applications of technology. Be curious. Learn about possibilities.”

Brown was the only institution that Karen, a self-described crafter and maker who was good at math and loved puzzles, applied to after high school. She took on a CS concentration with no prior computing experience whatsoever. “My father had been hearing a lot about computer science and thought I’d enjoy it,” she remembers. “It seemed like fun and I thought it’d allow me to support myself. I came from modest means, so that was important.”

Starting out with what was Professor Andy van Dam’s CS 11 at the time (now CSCI 0150), Karen hadn’t expected to be enthralled: “The community was amazing. It was hard, and I struggled, but I loved it.” When Andy began devoting more of his time to educational computing, Karen became one of the first developers for the Brown ALgorithm Simulator and Animator (BALSA), a cutting-edge electronic classroom, running software that demonstrated introductory concepts. Educational software became a passion, and she used a group independent study program with Elisabeth Waymire and Janine Roeth to create a new seminar class. “It was the first of its kind,” Karen says, “an entire curriculum around educational software with readings, guest speakers, and design projects. What thrilled me was that other students continued the Educational Software Seminar for more than a decade after we graduated – just a great leveling-up of collective knowledge.” 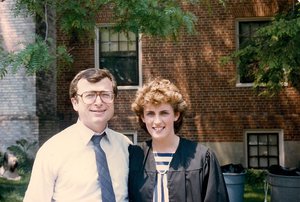 In her last summer before graduating, Karen continued her interest in applied research with a job at IRIS, a new group at Brown that focused on hypertext and combining object-oriented programming with modern user interface technology. “This was long before today’s browsers,” she says, “and it makes me happy that our work had an influence on HTML and the Internet that followed.” Happy to be coding for a living, she signed on full-time with IRIS after graduating and stayed with the organization for a half-decade.

Was all of this something that she’d anticipated? “I never had a five-year plan,” Karen says. “The landscape changes so frequently – five, ten, and let alone 35 years ago, many of us couldn’t have predicted the careers we have now. My best advice is to make sure your work aligns with your values. Stay agile while following your interests.”

Eventually, an economic downturn caused a funding shortage for IRIS, and Karen and her husband moved to England, where he’d grown up. But it felt like a move to the service sector after years of doing cutting-edge research, and Karen put California in her sights. It was 1991, and Silicon Valley was the absolute center of the technology world. She found a job at GO Corporation, a pen-based computing pioneer whose OS predated even Apple’s early Newton tablet by two years.

“At that point,” Karen admits, “I was intimidated by the myth of Silicon Valley engineers. Even with my strong background in advanced object-oriented programming from Brown, I had impostor syndrome.” Instead of creating apps, she took a job writing documentation on how to create them, writing sample code. A few years later, a startup called Macromedia beckoned, and Karen began working in their localization department. It was project management at its finest, she says, and she built a reputation for being someone who partners well with different project teams, eventually founding their usability testing and product security groups. When Macromedia was bought by Adobe, she continued to move up the ranks, ending up as Vice-President of Engineering.

It was during her Adobe days that Karen first attended the Grace Hopper Celebration of Women in Computing. “It was still small then,” she remembers, “but I wish I’d been involved years before.” She returned to work with new energy, quickly founding a women’s employee resource group at Adobe, where she helped equip women for career success. Mentorship quickly became a new love. It’s what truly made her happy, Karen says, more than her ascent to the top echelons of the company.

And so she did a career pivot and started a business as a leadership coach. “I left tech,” she says, “but not innovation, not that mindset. Instead of building software myself, I wanted to help women who are doing it. I still feel that way today.” But she soon realized that there was a problem: companies that thought of themselves as meritocracies really weren’t, and her role as coach didn’t feel like enough. Reform was needed to bring about real inclusivity, and as Karen contemplated her next step, she settled on the word allies to reflect a new trend of men taking action in support of diversity. Her initial focus was on male allies, but when she found that a hoped-for Twitter handle had already been taken, she realized that @BetterAllies was a superior choice, and the Better Allies Initiative was born: “It’s not just something that men can do – anyone with privilege and power can use it on behalf of others. For example, as a white woman I can help Black women, and as a straight woman I can advocate for LGBTQ-friendly policies.”

The initial premise of the Better Allies Initiative was to share everyday actions that anyone could take to be a better ally for someone in a historically underrepresented group (HUG). It proved popular, and public speaking requests began flowing in. “And almost every time I spoke,” Karen says, “someone in the audience would ask if I had a book, because they wanted more.” She published Better Allies: Everyday Actions to Create Inclusive, Engaging Workplaces in 2019 (a second edition is due out in January) and a companion volume, The Better Allies Approach to Hiring, followed a year later.

Two years later, the work continues. Asked for her latest thoughts on how our field can improve gender diversity, Karen cites the importance of expectations. “When parents buy toys or send kids to summer camp,” she says, “they’re making decisions on their child’s behalf, and ‘I don’t think my daughter would like to code’ might be one of them. As parents, we can do more: we can tell our young women to try tech on for size. There are also societal expectations about what girls should be good at. In Turkey, female computer scientists outnumber the men. Why can’t that be us?”

But given the events of 2020, is she still hopeful for societal change? “There’s a shift toward equity and social justice that I’m optimistic about,” Karen says. “Whatever the area, I’m seeing an appetite for individuals wanting to take action in a way that wasn’t there years ago. In tech, some of this is because men are finally listening to all the stories of discrimination that have been shared. Anti-racism books are at the top of the bestseller lists, and people are voting in record numbers. But they’re saying that diversity and inclusion statements aren’t enough. We’re all demanding to see results, the impact.”

As we start to wrap up, Karen lights upon an unexpected topic that ties together multiple threads of her work and life. “I firmly believe,” she says, “that public speaking is a multivitamin for any career. My first exposure to it was as a UTA, getting up in front of a class. I started my career writing code, and on my way to becoming a VP, I got the stage fright that most people get. Later, I was told that the best way to start a coaching business was to go out and talk from your own experience, so I started doing a lot of public speaking, even though I hated it.”

“But when you get comfortable talking to others,” says Karen, “you get visibility for what you do that could otherwise get missed. One of the reasons I wrote my book Present! A Techie’s Guide to Public Speaking was to help everyone improve their public speaking skills and to make sure that women and people from HUGs are getting the information that I got. I want them to be onstage, getting the visibility they deserve, so we can keep disrupting the stereotypes about who belongs in our industry.”