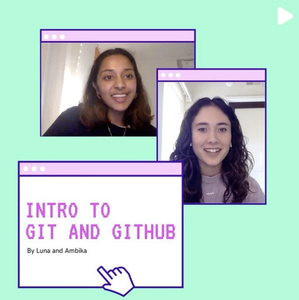 To promote diversity and inclusion in computer science, Brown CS graduates Luna Ito-Fisher ’21 and Ambika Miglani ’21 founded Decrypted By Us, an online learning community for underrepresented students interested in tech.

Formal CS education is often theoretical, says Ito-Fisher. But “practical skills,” like using the full features of an IDE, can be just as important. Students turn to online platforms to fill this gap. “People assume we know how to do something like build and deploy a website, but that’s not necessarily the case,” says Miglani, who used YouTube tutorials to teach herself front-end development.

So, Ito-Fisher and Miglani launched their own YouTube channel: Decrypted By Us. The channel features original, technical content developed by underrepresented students and new graduate engineers from schools like Brown, UC Berkeley, and NYU. Viewers can learn about Python, Git, and Figma through bite-size videos made by students who share their background and experiences.

Since their October 2020 launch, Decrypted By Us has become a twenty person team and grown rapidly on social media. The organization has received funding from the Brown Arts Initiative and is collaborating with TechTogether, Impact Labs, The Percentage Project, Young Entrepreneurs of Providence, Johns Hopkins University’s HopHacks and MedHacks, and The University of Chicago’s Radical Innovation for Social Change Lab.

What sets Decrypted By Us apart from other diversity initiatives is its focus on technical education. “We’re not just talking about how women in CS, for example, can blaze trails together, but teaching each other concrete skills,” says Charmaine Lee, content creator and graduate of The University of British Columbia. Decrypted By Us targets a new generation of coders, Lee says. “We grew up on YouTube. It’s easier to digest that type
of content.”

In her latest video, “Becoming Dr. Seuss,” Lee analyzes children’s literature with the Natural Language Toolkit to tag, sort, and graph words based on their linguistic properties. “It’s a fun platform to teach people about the interests that I have,” she says.

Content creators also use Decrypted By Us to deconstruct technologies used in the industry. Brown CS graduate Gabriela Asuncion ’21 developed a video on ReactJS fundamentals. “I think people learn by understanding concepts before they get into coding,” she says.

Technical journeys, however, are not separate from personal experiences. “I’m dyslexic, and when I first started CS, I realized that I could not read code,” says Xinru Li ’22, who created a video to guide others through the academic accommodations process.

With personable instructors, Decrypted By Us fosters a friendly environment that helps underrepresented students achieve their technical goals. “I want to encourage people to make their ideas a reality,” says Lauren Meier, content creator and graduate of UC Berkeley.

Ito-Fisher and Miglani are excited by their recent growth, but building community during the pandemic has been challenging. “We want the audience to know that they can seek mentorship from creators,” says Miglani. Ito-Fisher will participate in Brown’s Breakthrough Lab Accelerator program this summer. She aims to develop community engagement initiatives and build longstanding partnerships. “The best moments are when we see that other people want to be involved,” she says.

The views and opinions expressed above are those of an individual, and do not necessarily state or reflect those of Brown University or Brown University’s Department of Computer Science, nor does their publication here constitute an endorsement of them.