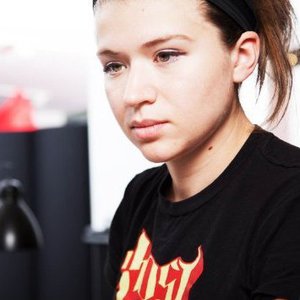 Click the link that follows for more news about other recent accomplishments by our alums.

Tatyana Dyshlova’s last few years have been fast-moving. In 2020, she co-founded and took on the role of CEO at FuzzyBot, a video game development studio, with a small but experienced team of colleagues. Late last year, FuzzyBot announced that it had received $3.5 million in seed funding, a major step forward for the burgeoning company. And her team is now in the midst of developing its first game, which Tatyana says will merge elements of the popular “action rogue” and “life sim” genres to create a unique experience for players.

After graduating from Brown in 2008 with a concentration in computer science, Tatyana worked at Microsoft’s Turn 10 Studios, the development studio responsible for the popular Forza car racing games. “They were a really, really good studio to start my career at,” she says, “because they ran it so well and I got to see game development done with a focus on work life balance and a meticulous attention to quality.” From there, she went to EA, where she met most of the people who ultimately joined FuzzyBot.

“I got put into this small ideation team,” she says. “We worked together for three or four years, developed a lot of trust between us, and realized we all shared the same values and beliefs about how games could be built well.”

When the pandemic hit, the team found one of their major projects canceled. “We were like, ‘OK, well, we want to take a chance and break out on our own, taking all of our experience and learnings to do something cool together,’” she says. So they started FuzzyBot.

Since their founding two years ago, the team has been immersed in the complex process of designing a game from the ground up. It began with the concept phase, where the project is defined and the core premise for the game solidified. In pre-production — which Tatyana says the studio is finishing now — key concepts are tested and development plans and pipelines are defined before the bulk of the content is created in production. The last phase before release requires a lot of testing and tuning, and can take months: “It will likely be a year or more before [the game] sees the light of day,” Tatyana says.

At Brown, Tatyana capitalized on the Open Curriculum to experiment with her interests outside of CS, providing her with experience that she says made her more self-aware after she graduated. “I think Brown has this very entrepreneurial spirit that it encourages from early on,” she says. “I got to experiment with a lot of my own ideas of what I wanted to do and learned how to work through failure.”

After graduating and entering the world of game development, Tatyana says she was surprised by how much each game comes together in the final stage of production. “One of my biggest challenges as a producer is trying to figure out at what points in development I can materially influence those last bits coming together and turning out to be a great game,” she says. “There’s a level of magic and art that goes into everything clicking together at the end.”

Brown CS regularly publishes news articles about our pioneering and innovative alums. We have no financial involvement in any of the companies mentioned above and have not been compensated in any way for this story.