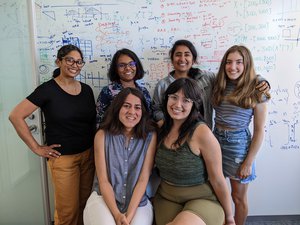 The article below originally appeared in the January, 2023 issue of Conduit, the Brown CS annual magazine.

Last summer, I interned at Brown University’s Data Science Initiative (DSI) with Professor Ritambhara Singh. The work I was doing, in computational genetics, was fascinating. And the office space was modern and light-filled. But most importantly, the lab was filled with welcoming grad students and amazing professors who worked right next to me.

One day, my mom, Amy Greenwald, a computer science professor at Brown, visited me at work. As I showed her around the floor, she seemed to know everyone we passed. Interestingly, all the people she knew had something very important in common: they were all women!

Even in 2022, computer science remains a very male-dominated field: according to computerscience.org, only 18% of computer scientists are women. So it
surprised me that all five computer scientists my mom ran into at DSI were female. In fact, I calculated the probability of this event: just 0.02%! This unexpected phenomenon – being surrounded by women like me – made my working environment more enjoyable than I imagined it would be when I was first looking for summer internships.

I didn’t even realize how easy I found it to adjust to my workspace until I reflected on my other experience as the only high school intern at Brown University’s DSI. This past spring, I audited Honors Linear Algebra, a class with a professor and TA who were both men. Not only was I representing all high schoolers, I was also one of few girls in the class. I didn’t want to stand out – I didn’t even want to ask questions out of fear of slowing down the class. Representing a population that is underrepresented and underestimated can feel like a heavy burden.

Working at DSI last summer has been the opposite of my experience in Linear Algebra. There were so many kind faces who I suspect, at other times, have felt just as out of place as I have. I think it is because they empathized with me that they went out of their way to create a warm and welcoming environment.

While working for Professor Singh, I no longer worried about asking questions or making mistakes. Instead of feeling like I had to prove myself to gain respect, I felt like people already assumed I was capable. I didn’t feel out of place at all. Instead, I felt empowered to learn as much as I could and pursue my curiosity as far as it could take me.