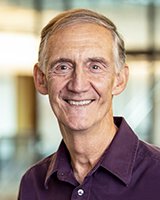 Click the links that follow for more news about Ed Lazowska and other recent accomplishments by our alums.

Last year, Brown CS alum Ed Lazowska received a surprise for his birthday: a fund supporting multiple endowed professorships, named in his honor, to commemorate his extensive contributions as a professor of computer science at the University of Washington. Launched by friends at Microsoft and Google and supported by more than 100 others, the professorship fund is a testament to Ed’s long-standing work in promoting computer science research and education over his long career.

Ed’s journey in computer science began almost by accident. He entered Brown as an engineering major, but felt uninspired by his first semester classes and the prescribed curriculum. After a brief switch to physics, he took an introductory computer science course with the late Charles Strauss, a former professor of applied mathematics. “I just loved it to death,” Ed says.

From there, he enrolled in a number of courses taught by Brown CS Professor Andy van Dam, who would become Ed’s mentor and life-long friend. Andy put Ed to work in the basement of the applied math building, where he and a team of undergraduates worked on a wide range of projects that included compiler development, text editing, and microprocessor programming. That freedom to experiment, Ed says, was foundational in fostering his love of the field. “I guess these days you’d call it undergrad research, but we were just building stuff,” Ed says. “It was wildly exciting.”

Upon graduating from Brown, Ed studied performance evaluation techniques at the University of Toronto. He says he chose the school because that’s where Andy told him to go — “he would just tell us what to do next and you’d just do it, because he’s Andy,” Ed says. When he received his Ph.D. in 1977, he joined the computer science department at University of Washington, where he remains to this day.

Much of Ed’s initial work built off of his doctoral research in the evaluation of performance in computer systems, though in recent years, he has focused increasingly on data-centric techniques. Throughout his career, he also demonstrated a passionate commitment to increasing participation and diversity in computer science, developing a number of K-12 computer education and outreach programs in the Seattle area and substantially increasing the diversity of his own department at University of Washington.

Despite residing in Washington state, Ed has remained closely connected with the Brown computer science community since his time as an undergraduate. He stays in touch with a large network of friends that he made at Brown, many of whom, he says, are united both by a shared love of Brown computer science and by their mutual ties to Andy. “Brown CS and Andy shaped my life and so many other lives,” Ed says. “So many of us owe him so much.”