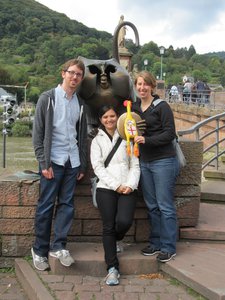 Thirty-five years after the founding of the department, Brown CS attendance at international conferences is anything but uncommon: strong representation and participation are the norm. But the three students who flew to last week’s Heidelberg Laureate Forum (HLF) took an unusual step to bring Brown CS spirit to the event, expanding departmental tradition and proving themselves right at home in a world-class environment where collaboration thrives.

Now in its second year, the HLF provides an annual gathering in which Abel, Fields, and Turing laureates interact with 200 of the world’s best young minds, divided evenly between computer scientists and mathematicians. Irina Calciu, Max Leiserson, and Layla Oesper were selected from a pool of more than 2000 applicants, and they were joined by alumnus Matthew Lease PhD ‘10, providing Brown with an impressive 4% of worldwide CS attendees at the conference and 20% of American ones.

They were also accompanied by a chicken. 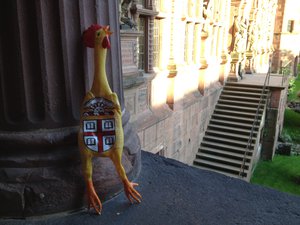 (If you’re not familiar with the rubber chicken tradition at Brown CS, click here.)

“It just seemed like a good idea!” laughs Layla. “We were so excited about meeting the laureates and the incredible diversity of researchers. There were students from six different continents! We decided it would be fun to take pictures of a Brown CS rubber chicken traveling the world, meeting people, and showing our pride at having four attendees.” The chicken complied, dutifully posing for pictures with Vint Cerf and John Hopcroft, atop castles, on a boat trip, and even during an Oktoberfest celebration.  (A selection of photos is available here.)

Structured as a mix of presentations and social events, the Forum’s informal talks included sometimes unexpected advice (Leslie Lamport told listeners that since they spend more time sending e-mail than doing anything else, they should edit each message as if looking to publish them) and frequently had a galvanizing effect. “After hearing John Hopcroft talk about changes in theory needed to support changes in our field,” Max remembers, “the whole room was energized, and he was swarmed by people. But we’d already met him when he sat down to have lunch with us the day before, possibly because we were carrying a rubber chicken!”

All three students note that while they were interested in finding peers with similar scientific interests (Layla mentions that a new friend may soon be using an algorithm developed by Ben Raphael’s group), delving deeper into one’s own research area wasn’t the conference’s true rationale. “HLF gives you a high-level perspective on worldwide research that you hadn’t known was going on, and how the two disciplines benefit each other, such as computer simulations of mathematical work,” notes Max. “But the socialization and interaction are what makes it all approachable. It’s where the real learning happens.”

Bringing a chicken everywhere also had some unexpected (and positive) consequences. “Not only did the chicken start conversations,” says Irina, “It caused people to tell us stories about traditions at their universities. That made me proud that tradition is so strong here at Brown CS.  It defines us. We have a real commitment to getting to know everybody in the department and collaborating, and we brought that spirit to the Heidelberg Laureate Forum.”

The next time you attend a conference, bring a chicken with you, take a picture, and send it to Jesse Polhemus (jcp@cs.brown.edu). We’d be glad to tweet about it with the #BrownCSConferenceChicken hashtag!