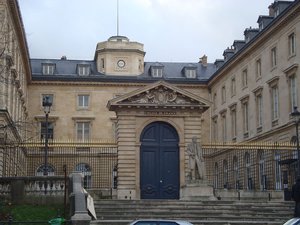 There are plants that bloom once a century, and sometimes the right city --this time the one called La Ville Lumière for both its intellectual contributions and early adoption of street lighting-- and the right person can here and now, from blank canvas, evoke the spirit of a science and an art in transition.

This time it's John Hughes, who strode the Quartier Latin with the words of Cyrille Aimée (and maybe the crumbs of a financier aux pistaches) on his tongue to deliver an invited lecture ("The Media Transition in Expressive Rendering and Modeling") at one of the world's great bastions of pure learning, the Collège de France.

"This history of expressive rendering and modeling," he explains, "is largely one of imitation: we make paintings in the style of Monet, cartoons like Dr. Seuss, watercolors, mosaic tile images, and so on. In each case, problems in representing or simulating the medium require that we be ingenious or devious or both: line drawings have aliasing problems; watercolors require stable but fast fluid simulation, etc. A few recent papers suggest a new and very promising divergence from this path: a search for media that are intrinsically suited to the kinds of representations and interactions that are natural both for a human and a computer rather than those that are naturally occurring in the physical world. I will discuss this evolution, some of the potentials of such new media in both rendering and modeling, and some of their potential pitfalls as well."