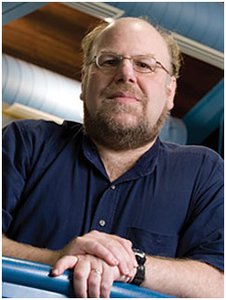 Brown CS Master's and PhD alum James Hendler, now at Rensselaer Polytechnic Institute, has just returned from the Digital Asset Symposium in New York City, where he received the Association of Moving Image Archivists (AMIA)'s inaugural AMIA Spotlight Award. The award is given in recognition of significant contributions to the field of media preservation and access.

“Dr. Hendler’s pioneering work with the semantic web, artificial intelligence, and open data have been invaluable to our field and will continue to inspire and define the expanding universe of digital moving image archives,” says AMIA President Andrea Kalas. “We are indebted to him — he has helped content and metadata be available for researchers of today and dreamers of tomorrow.”

James completed his PhD at Brown in 1986 after working with Professor Eugene Charniak, producing a thesis on automated planning and scheduling. He received a 1995 Fulbright Foundation Fellowship, served on the U.S. Air Force Science Advisory Board, and is a fellow of the Association for the Advancement of Artificial Intelligence, the British Computer Society, the Institute of Electrical and Electronics Engineers, and the American Association for the Advancement of Science.

Hendler is perhaps best known as one of the originators and leading proponents of the Semantic Web, a term that he coined with Tim Berners-Lee and Ora Lassila in a 2001 article in Scientific American. The Semantic Web refers to the use of standards defined by the World Wide Web Consortium (W3C) to provide a common framework of data formats and exchange protocols. The eventual goal is to improve collaboration, research and development, and innovation by allowing data to be shared and reused across application, enterprise, and community boundaries.